Thrombolysis is a procedure which uses medication to dissolve a blood clot. The medications used in thrombolysis are called thrombolytic agents.

Thrombolysis is most commonly performed to treat a blood clot in the lower limbs, which causes acute limb ischaemia (restricted blood flow in the affected limb), leading to pain in affected area. It can also be used to treat blood clots in organs such as the liver or kidney, as well as treating restricted blood flow in the small intestine due to inflammation or an injury, massive pulmonary embolism (a blood clot in main artery of a lung) or stroke. 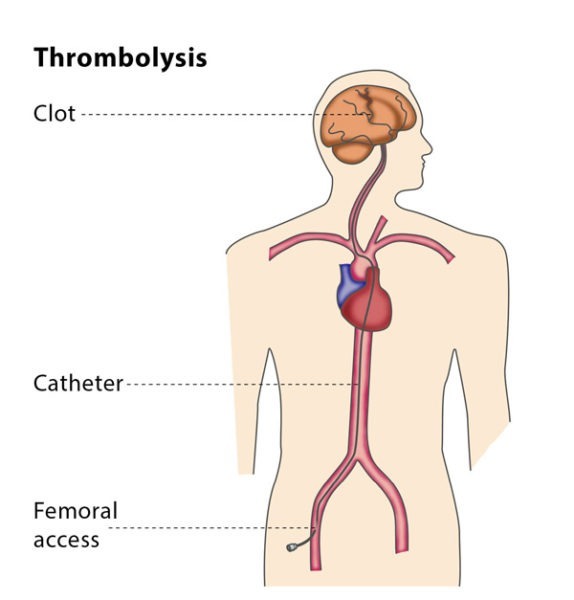 The interventional radiologist will insert a 3 mm plastic tube (called a sheath) into the base of your skull or your groin and will guide the sheath to the blood clot.

Thrombolysis is performed using medications which prevent blood clots from growing (known as lytic substances), which are administered via a catheter into the thrombus. Catheters designed to be used in this treatment have lots of tiny holes. This means that the distribution of lytic substances can be spread out across the catheter and have maximum effect. 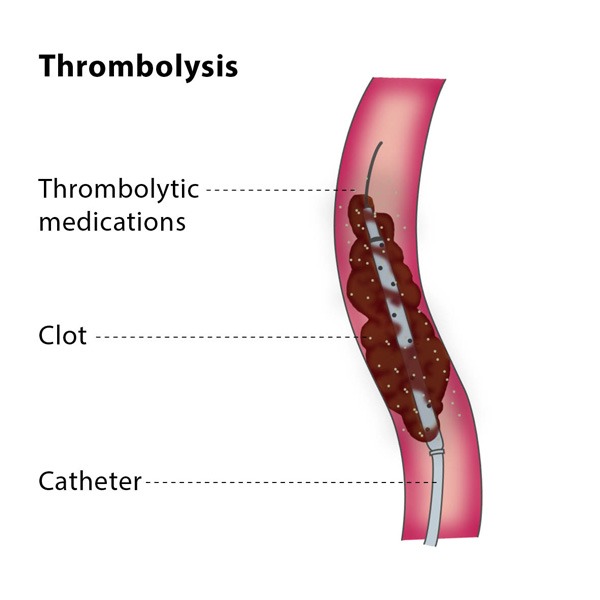 Thrombolysis is performed to remove the blood clot and to prevent the vein or artery from becoming permanently blocked and restricting blood flow to a limb or organ. Restricted blood flow leads to acute symptoms of pain, a lack of pulse, paleness, paraesthesia (when a limb ‘falls asleep’) and paralysis, as well as the possibility of permanent complications such as tissue necrosis (the death of tissue cells in your body).

You will probably also need medication to prevent blood clots forming as well as a thrombectomy, for which you will be under strict observation for a 24-48 hours with several angiographic follow ups.

You will also be treated for the underlying condition which caused the thrombus, which may be a heart rhythm disorder or a small blood clot caused by deep venous thrombosis.

Minor risks include the risk of bruising at the puncture site in your neck or groin, or in the affected limb.

The major risks tend to be due to the devices used in the procedure, such as the risk of the blood clot travelling deeper into the artery or vein or an injury to the affected area during the treatment.

In rare cases, the patient experiences bleeding in the skull due to the thrombolysis – if this occurs, the treatment will be stopped immediately.