What is an endovascular thrombectomy?

Your doctor may recommend that you have a thrombectomy as a treatment for stroke or for mesenteric ischaemia, where the blood flow in your small intestine is restricted due to inflammation or injury.

The interventional radiologist will insert a 3 mm plastic tube (called a sheath) into the base of your skull or your groin. They will guide the sheath to the blood clot.

There are a number of different techniques for this procedure. The blood clot can be removed using a vacuum to suck the thrombus out, or mechanical equipment to break up the clot, or with clot using saline jets or ultrasound waves. 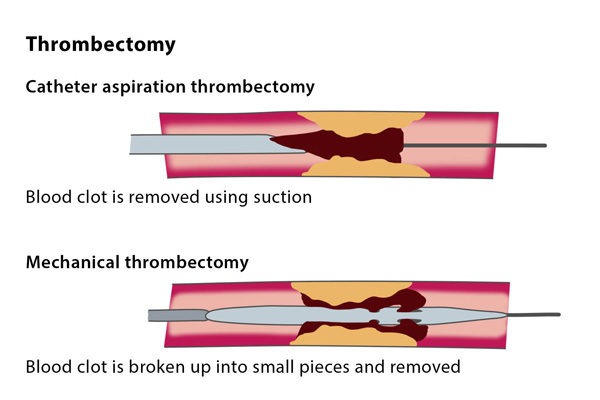 The devices for these techniques are inserted over the sheath into the affected artery. You may also need additional catheter thrombolysis, a procedure in which clot-dissolving medication is delivered to the clot under X-ray imaging.

A combined treatment using both thrombectomy and thrombolysis can continue over 24-48 hours with several follow-ups using angiography at regular intervals.

An interventional thrombectomy is used to remove the blood clot and to avoid a permanent blockage in the vein or artery which would prevent blood flow to a limb or an organ, causing acute symptoms of pain, lack of a pulse, paleness, paraesthesia (when a limb ‘falls asleep’) and paralysis, as well as the possibility of permanent complications such as the death of tissue cells in your body.

A thrombectomy is often combined with other treatments, such as treatment to stop blood clots forming or thrombolysis, which involves using medication to break the blood clot down and is followed by strict observation for 24-48 hours.

You will also be treated for the underlying condition which caused the arterial thrombus, such as a heart rhythm disorder or a small blood clot caused by deep venous thrombosis.

In rare cases, patients experience bleeding in the skull as a result of the combined thrombectomy and thrombolysis – if this occurs, the treatment must be stopped immediately.