What is the endovascular treatment of arteriovenous malformations?

Arteriovenous malformation (AVM) refers to an abnormal connection between arteries and veins. Different types of AVMs occur in different clinical situations, including infantile haemangioma (a benign tumour made up of blood cells), and connections present at birth which are between vessels larger than capillaries (such as veins or arteries) – these are known as high-flow AVM.

The most common form of AVM is low-flow AVM, in which the abnormal connections are in an area with a low blood flow, meaning the space fills and empties slowly. This may be due to compression or gravity, a condition such as Klippel-Trénaunay syndrome or may be a combination of both these types. Another form of AVM is lymphatic malformations, though these are uncommon and may include cystic lesions (cysts, abscesses or bruising).

Klippel-Trénaunay Syndrome (KTS) is a rare congenital medical condition in which blood vessels and/or lymph vessels fail to form properly. The three main features are a port-wine stain, venous and lymphatic malformations, and soft-tissue enlargement of the affected limb. The condition tends to affect a single limb, usually a leg.

Although AVMs are congenital (present at birth), they are mostly diagnosed in adults under 40, and have a death rate of 10-15%.

In most cases, AVMs have no symptoms and so are discovered by chance, but the symptoms the patient experiences or does not experience depend on the location of the AVM. AVMs sometimes cause intense pain or bleeding and may lead to other serious medical problems. AVMs do not always require treatment.

You may be advised to undergo treatment for the AVM if you experience haemorrhaging, pain, ulceration, if your heart is pumping too much blood, if you have a mass which interferes with normal activity or growth, or if you develop disfiguring lesions.

The only indication that the treatment may not be suitable for you is if your anatomical situation would prevent it, meaning that the structure of the affected blood vessels may prevent treatment from being carried out. It is therefore vital that the interventional radiologist carries out imaging before the procedure to evaluate which type of AVM you have and how the feeding vessels are structured. 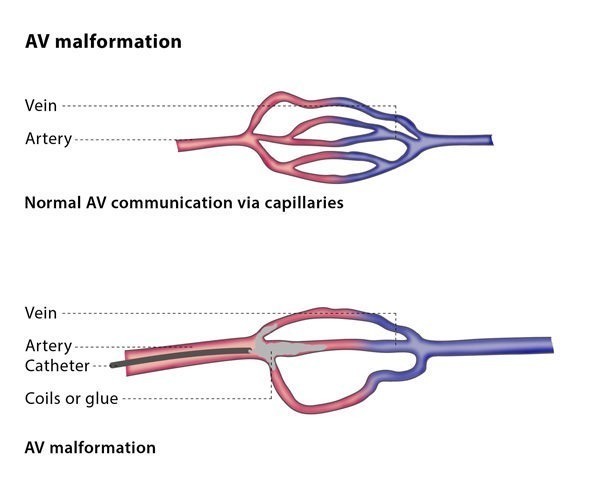 The interventional radiologist will choose the type of endovascular procedure which is most suitable for you, depending on the site and type of your AVM. If the treatment is for infantile haemangioma, it may be removed surgically, to prevent psychological trauma, or it may be managed using embolisation.

If you are being treated for high-flow AVM, the therapy will aim to block the connection between the arteries and veins by embolising the tangle of blood vessels (nidus) or the central part of the lesion where the majority of the veins are present. The interventional radiologist will choose the material for the embolisation procedure based on the type of AVM you have and will aim to completely get rid of the nidus whilst also preserving normal blood flow. The materials used for the procedure are usually materials designed especially for the procedure, such as glue or metallic coils. Sometimes the nidus is directly punctured by injecting an embolic agent.

If you are undergoing treatment for low-flow AVM, you will be given an injection of sclerosing agent, a drug which is injected into vessels to make them shrink. In some cases, this will be done under fluoroscopy. There are limited treatment options for congenital venous dysplasia, but sometimes no treatment is needed. In severe cases, the interventional radiologist may use surgical stripping, sclerotherapy or an endovascular ablation technique. If you have symptoms on your skin, such as a port-wine stain, you may be advised to have laser treatment.

If you have a lymphatic malformation which contains fluid, a drainage treatment will be most suitable for you.

Minimally invasive treatment can be performed for therapeutic reasons (to treat the condition) or for palliative reasons (to relieve the symptoms). The aim of the procedure is to exclude blood flow from the lesion and so reduce the symptoms and risks of AVM, such as bleeding.

The rate of bleeding varies from patient to patient, but if your AVM is associated with an aneurysm then the risk of bleeding is over 50%.

Endovascular procedures to treat AVM also carry some risks, such as bleeding, bruising or ulcers at the site of the puncture, the embolic agent causing embolisation somewhere other than the target area, restricted blood supply if vessels supplying an area with blood are blocked, and toxicity, either locally or to other organs, caused by the blockage or sclerosing agent.