What are biliary procedures?

Percutaneous transhepatic biliary drainage (PTCD) is the placement of a drain into bile ducts using needles inserted through the skin. The procedure can be used to treat cholestasis (where the bile cannot flow from the liver to the small intestine), which may be a result of a narrowing or blockage in the bile ducts or of a bile leakage after an operation.

Biliary stenting is performed after biliary drainage if the blockage is malignant (cancerous) to keep the bile duct open and to allow the drain used in PTCD to be removed. This involves putting a stent (a mesh metal tube) into the bile duct, which then functions as a supportive skeleton to prevent the duct from closing. 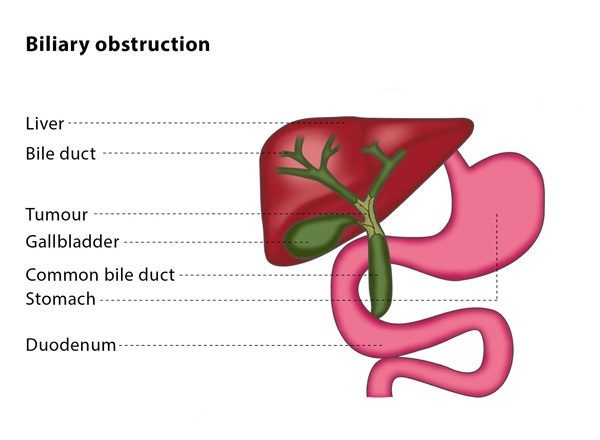 Puncturing the bile duct is usually performed under sedation and local anaesthesia, though in rare cases and depending on the patient’s underlying condition and age, the procedure may be carried out under general anaesthesia.

You will be given antibiotics beforehand to prevent infection. The procedure will be carried out in a sterile room while you lie on your back. The interventional radiologist will perform the procedure under X-ray guidance, though sometimes ultrasound is used in addition to fluoroscopy to confirm the direction for the puncture. 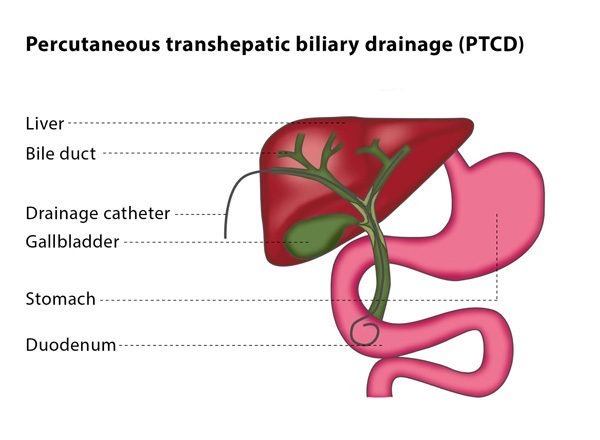 As the needle is withdrawn, the interventional radiologist will gently inject a diluted contrast agent, a substance which makes the area show up better under imaging. This means that, when the needle enters the bile duct, the tubular structure is more clearly visible under imaging. The interventional radiologist will then insert a guidewire into the bile duct, which is followed by a catheter. The guidewire and catheter are used together to move past the blockage and reach the intestine.

Once the interventional radiologist has removed this catheter, they will dilate the blocked liver tract so that the drainage catheter can be placed. A drainage catheter has multiple holes in its side which are used to drain the bile in two directions, outwards into a bag and inwards into the intestine. The bag will be attached to the skin and left in place for a few days until the biliary tract has decompressed. During the period when the bag is attached, the catheter is flushed 2-3 times a day with sodium chloride to keep the side-holes open.

If you are unsuitable for endoscopic procedures, PTCD is a possible alternative for you. It can be used to decompress the biliary ducts if they are blocked by a mass lesion or a stone, or to bridge a hole if you experience bile leakage.

One of the most common complications is bleeding into the biliary tract, usually from a vein. This normally does not need treatment as it heals by itself. A less frequent complication is major bleeding requiring a blood infusion or further interventions, such as surgery or embolisation of the vessels.

If you have a biliary infection, the PTCD procedure may cause fever, chills and septicaemia. A further risk is the possibility that the areas around the tract will be punctured during the procedure, such as the gallbladder or bowel.