Angiography (also known as arteriography) is a medical imaging technique which is used to visualise the inside of your blood vessels, particularly the arteries.

A diagnostic arteriogram is a procedure which involves inserting a needle or catheter into an artery, followed by injection of a contrast agent and then observing the area via imaging. 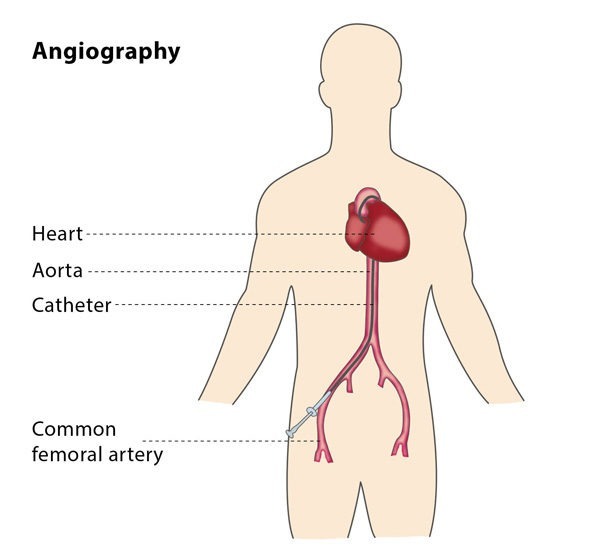 You will have a local anaesthetic for the procedure. The interventional radiologist will insert a catheter and guidewire into the affected area and will inject the contrast agent so he can visualise the anatomy of your artery and the disease. Occasionally, the interventional radiologist will need to access the artery through your common femoral artery (CFA), which is in your thigh. 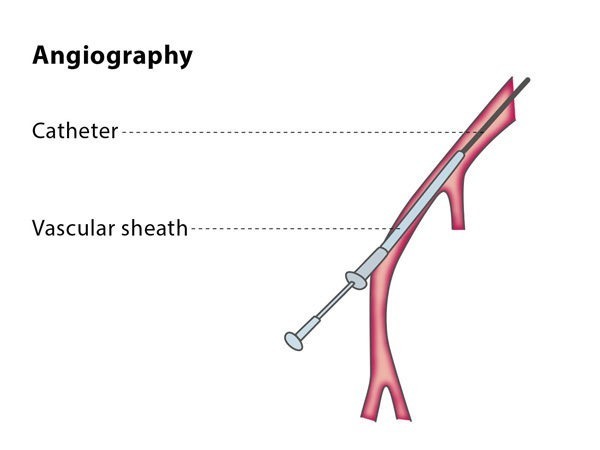 You may be advised to have a diagnostic angiography if your doctor suspects that you have vascular disease, particularly acute pulmonary embolus (a mass which moves around your body and may clog an artery), and other tests have been unclear. A diagnostic angiography can also be used to diagnose and localise a hypervascular tumour (a tumour with a large number of arterial blood vessels).

A further possible reason to have an angiography is as a pre-operative procedure, meaning your doctor would like a more detailed knowledge of your anatomy, as this knowledge is beneficial for procedures such as revascularisation (restoring blood to an area with a restricted blood supply), local tumour resection (surgically removing a tumour) and organ transplantation.

A diagnostic angiography also aids with diagnosis and treatment of post-operative or traumatic complications. It can also be used during procedures such as thrombolysis, angioplasty, stenting and embolisation as it gives the interventional radiologist performing the procedure a clearer view of what they are doing.

There are a number of possible risks. You may have bruising, a pseudoaneurysm (when a bruise forms outside an artery wall) or a blood clot.

Systemic complications are complications which affect the rest of your organ systems. These occur in less than 5% of cases, and include nausea, vomiting and fainting. In less than 1 in 1000 cases, patients experience a life-threatening reaction to the contrast agent. Mortality associated with the contrast injection occurs in less than 1 in 120,000 cases and this is usually related to underlying factors, such as severe congestive heart failure, major trauma and general weakness.

Individuals react to the contrast agent in different ways, and it is possible you will experience hives, puffy eyes or wheezing, though these complications occur in fewer than 3% of angiographic procedures. Most reactions are mild, with more than half not needing any therapy at all and less than 1% requiring hospitalisation.

When less strong agents are used, there are fewer reactions. Agents that are more diluted tend to be used in patients with a history of reacting to contrast agents or patients who have more than one other major risk factor.