What is percutaneous tumour ablation?

Percutaneous tumour ablation refers to a range of techniques which destroy tumour tissue via needles placed through the skin. Some techniques use chemical agents (such as absolute ethanol), while others use physical agents, which may be thermal (using heat) or non-thermal. Thermal ablation techniques destroy tumours by using different kinds of applicators to freeze the tumour (called cryoablation) or to heat the tumour, such as radiofrequency ablation, laser ablation, microwave ablation and high-intensity focused ultrasound (HIFU).

Non-thermal ablation techniques use other sources of energy to achieve tumour destruction. Coblation uses an electrical plasma field to disintegrate the tissue by rupturing the bonds between the molecules which make up the tumour tissue. Irreversible electroporation uses high voltage electric shocks to pierce the cell membranes and cause cell death.

The procedure will be carried out using image guidance, such as ultrasound, CT or MRI, to control the insertion of the devices and the energy deposition. You will be anaesthetised for the procedure. For most ablation procedures, the interventional radiologist will insert one or more needles or applicators into your tumour to deliver the chemical agent or physical energy. 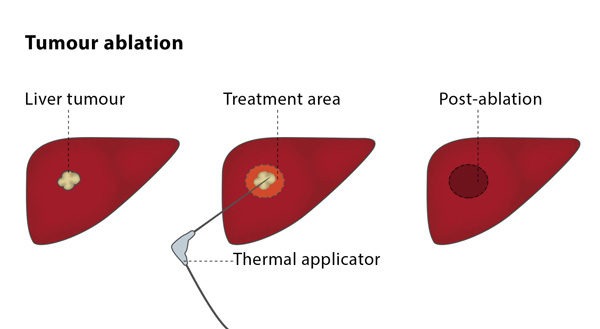 The goal of tumour ablation is to destroy the tumour without using surgery. Whether you are suitable for this procedure depends on the size and location of the tumour as well as your clinical situation.

The insertion of the needle or applicator may cause bleeding or puncture surrounding organs. Another risk is the accidental leakage of the chemical agent or uncontrolled depositing of radiation energy, which may cause serious damage to the surrounding tissues.